Keeping the Mood of the Diamond Industry Positive

The trade in almost all industries operates on solid financial figures. Only, with diamonds it is something entirely different that drives the industry forward. The diamond business is resting on moods, dreams, and desires.

The industry as a whole and both diamond import and export are growing year by year, but profitability is decreasing. Even giant companies like Chow Tai Fook reported problems with the sentiment. According to the most recently released public records, company revenue fell 17 percent to $8.3 billion (HKD 64.277 billion) due to decreased consumer sentiment. However, their gross profit margin as a percentage of sales rose to 29.7% compared with 27.3% one year earlier.

After the gold rush in 2014, the revenue fell. But contrary to the industry average, Chow Tai Fook managed to raise its gross profitably from 27.3% to 29.7%. They reported that it was due to a strong increase in gemstone set jewelry, where the margins are exceptional. 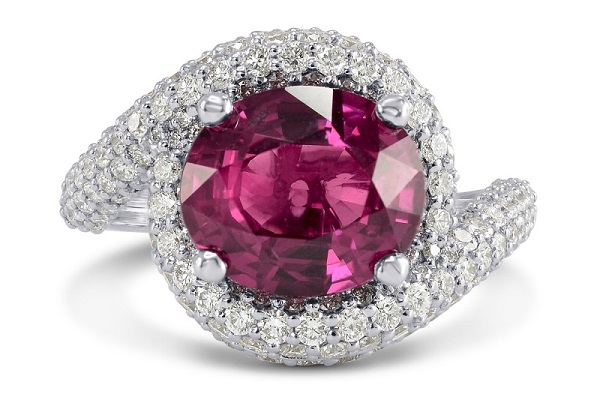 Martin Rapaport, president of the Rapaport Group, holds his finger on the pulse of the diamond industry. Although I respect the individual, I am always worried when he delivers his weekly sermon. He reminds me of the magidim (story tellers) who used to travel around Galicia (a geographic region in Eastern Europe) and present exalted speeches warning the villagers to change their evil ways and repent. In his speech on CNBC during the Basel show, he advised manufacturers to stop buying rough and start buying polished goods, sending their factory cutters and polishers on holiday.

Leibish Polnauer and Martin Rapaport at the Show in Basel 2015

I would not call Martin Rapaport a fool, as I have heard others say. In fact, I actually quite like the man. We had a few, somewhat heated, discussions in this year’s Basel show. My basic argument with him is not about his price list, but about his comments and predictions. The market urgently needs positive motivation. As I mentioned earlier, this is an industry run on dreams and desires, and therefore requires an encouraging spirit through all segments.

Rapaport is considered a market guru. Regardless of whether people like or dislike his market predictions, the Rapaport price list is recognized as an important contribution to the industry. Martin is also a Cohen, meaning that he comes from a tribe of priests who served in the holy temples of Jerusalem built in 957 BCE and 538 BCE. Maybe it is due to this fact that many feel his predictions are a heavenly message sent to us straight from the mouth of G-d.

Whenever we speak I remind him of the importance of positive thinking. I am not aware of the messages whispered to him through the Jerusalem air, the holy city where he lives. But I have noticed that his more recent comments on the situation of the industry appear to be much more positive, and in forward-looking terms.

I was pleased to see his latest Rapaport Trade wire market comments on the JCK Las Vegas Show: JCK Vegas show meets low expectations and creates healthy positive mood even though sales were slow for many suppliers. The antique show had very good to excellent with strong sales and traffic. The demand for branded estate jewelry is improving. The U.S. market is stable and consistent.

Our industry is surrounded by illusion. Therefore, in order to create the right perception every positive public comment about diamonds is crucial. Even a small observation can have a lasting effect. Our industry is in need of a complete content overhaul and a refocusing towards positive thinking. The fancy color diamond segment has done far better than white goods over the past year, but we also need positive thinking and innovative actions.

I loved the joint seminar of NCDIA and De Beers in Las Vegas. NCDIA stated that natural colored diamonds are the highest growth segment for the jewelry business and retailers can achieve "unprecedented profit" from colored stones in its "How to Capitalize on the Growing Consumer Desire for Natural Color Diamonds" seminar.

In summary of the key points from the panel discussion, they said that retailers should accept that consumers desire uniqueness in jewelry but most cannot afford natural colored stones; retailers must educated customers on the differences between color ranges and price points and "have the goods" in the store. On the supply side, dealing in colored stones is highly competitive and it is most important that retailers build relationships with reputable suppliers, dealers and designers to ensure authenticity and supplies.

We have the greatest product on the face of earth. Let's make it together a winning ticket!