LEIBISH has appeared on many media outlets, and now they can add Channel 4s popular UK series to the list, The Shopping Guide to Saving Money! After conducting their research into where they could find the best diamonds at the most competitive prices, the host, Dave Fishwick, decided to visit LEIBISH in Tel Aviv in order to learn more about the industry. Not only was Dave impressed with Tel Aviv as a city, but he was also completely blown away by the industry and the money he saved by purchasing a diamond ring through Leibish.

Leibish appears on all the largest media outlets

The Shopping Guide to Saving Money

The Shopping Guide to Saving Money is a British TV show that airs on Channel 4 in the UK and highlights various industries and how to shop appropriately so that you can save money. The show has millions of viewers, and touches upon different topics that essentially help these individuals save oodles of cash. This episode, was split with the first half focused on diamonds and the second on coffins.

The nature of the show is to inform viewers on how much things really cost to make, based on the audience's specific demands. When diamonds came up as one of the items that the public had an interest in knowing more about, LEIBISH was approached to shed some light on the industry. Given that Israel is one of the central hubs for the diamond industry, it is not too much of a surprise that Dave Fishwick headed to the Middle East to find out more about diamonds. However, of all the diamond establishments, LEIBISH was chosen. After showing Dave around a bit and introducing him to the concept of the rough diamond, explaining that an average individual does not have access to such stones or cutters and polishers who could transform it into a faceted diamond, Leibish himself showed David both fancy yellow diamonds and colorless diamonds. Dave was floored by the difference in price between stones of various colors and sizes. In the end, however, Dave selected a colorless stone and the desired setting. He agreed on the price, shook on it, and paid for the diamond ring in full.

The episode continues with the diamond story, once Dave has returned to England. There he brings the diamond to an appraiser, who valued it at over double its sale tag price. Dave shares that even though he had to pay taxes to bring the stone into the country, he was able to save over a thousand pounds.

The story wraps up by claiming that though not everyone can fly to Israel to purchase a diamond, there are many ways in which one can save money when buying diamonds. There is most definitely a markup and the trick is to know where to go. Online diamond purchases were mentioned as one way to save money, as there are less overhead costs. LEIBISH offers a fine selection of both fancy color and colorless diamonds online, where you can view thousands of diamonds and diamond jewelry pieces. 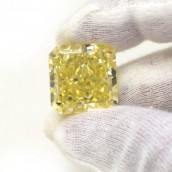