Largest Diamond in the World To Be Auctioned this June

While diamonds are not all about the size, and are mostly appreciated in their cut and polished state versus their rough one, there is something to be said about a 1,109-carat rough diamond. A stone of this exact carat weight was recently discovered and is now the largest rough diamond on the planet, and the largest to be mined in more than a century. Sotheby's will be offering the gem-quality rough at a London auction on June 29.

Dubbed the Lesedi la Rona, which means “Our Light” in the Tswana language, the colossal rock is said to sell for likely over $70 million. The Canadian diamond mining company, Lucara Diamond Corp, discovered the gem in Botswana back in November 2015. Aside from being unusually large, around the size of a tennis ball, the diamond also displays top color, quality, and transparency and is believed to be between 2.5 billion and 3 billion years old. Furthermore, it is most likely that this diamond belongs to the type IIa category, which account for less than 2% of all gem-quality diamonds. There is only one known diamond that surpasses this incredible stone in size and that is the famous Cullinan Diamond, which weighed 3,016.75 carats before it was cut into several smaller stones.

Given that this find sets Sotheby's apart from other distinguished auction houses, there is bound to be competition heating up. Christie’s, another prestigious auction house and a rival to Sotheby’s, will be offering a remarkable 5.03-carat rectangular fancy vivid green diamond on May 31 in Hong Kong, which is estimated to bring in $16 million to $20 million.

Many large diamonds have been discovered over the last century and in the centuries before it. In fact, over the past two months alone there have been a number of large fancy colored diamonds at the auction houses. However, diamonds of this caliber and that of the Cullinan Diamond discovered in 1905, rarely come along. The last diamond to the hold the title of ‘largest diamond discovered in the last century’ was the 603-carat Lesotho Promise. The Lesedi la Rona nearly doubles it in size making it one extraordinary discovery indeed.

Regardless of who ends up with this fascinating specimen in his or her possession, and the price that was paid, it is certain that it will be quite the bout. To own the largest diamond on the planet is no small thing, and will not be handed to the first bidder very lightly. June 29 couldn’t come soon enough!

Do you also love large diamonds of excellent quality? Look through the largest fancy colored diamonds LEIBISH has in stock! 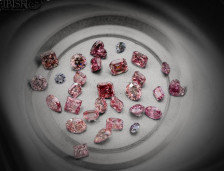 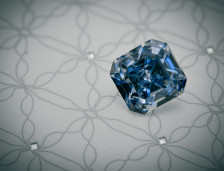