The Risks of Polishing Diamonds

Diamonds in their natural form are not the sparkling, glamorous gems that most people are accustomed to seeing! Anyone who has ever seen a rough diamond compared to a finished, polished one, is nothing short of astonished. To the untrained eye, a rough diamond looks like any other opaque stone, and may not even be recognizable as a valuable object! Though there is most definitely something remarkable about a diamond in its rough state, it looks absolutely nothing like a polished one. This is because the natural geological structure of a diamond is not optimized for the beauty that we appreciate, and is in actuality a man-made art. 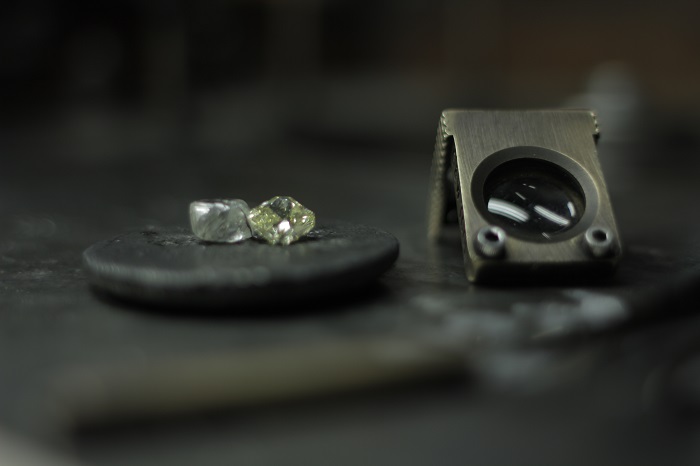 A rough diamond next to a polished diamond

How Diamonds Are Polished

A tremendous amount of knowledge, experience, and most importantly, state of the art equipment is used to transform a primitive stone into a sophisticated, shimmering gem. First the piece of rough is assessed by a computer for what cut and shape would most beautify the diamond's appearance. There are numerous options for how the stone can be cut, and the diamond cutter's goal is to 'waste' as little of the diamond as possible. Then, the diamond is placed on a piece of equipment called a polishing wheel, where a large stone disc covered in a layer of solidified diamond dust rotates and sands down the diamond in short bursts. 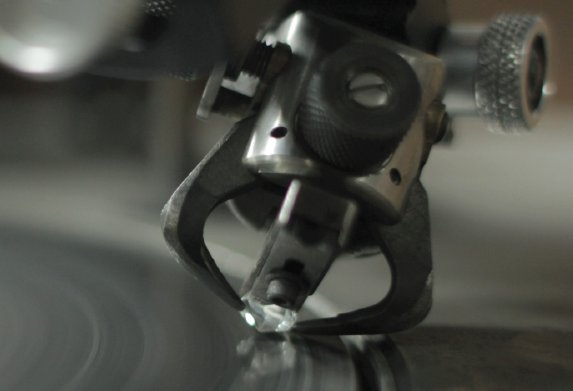 A colorless diamond on the polishing wheel

The art of cutting and polishing a diamond is slow, delicate and intricate. The larger and the more unusually shaped the rough stone, the harder it will be to complete the polishing process. A mistake can lead to a botched diamond that cannot be repaired! Though many times maintaining a stone’s size takes top priority, other times it is felt that it is worth the risk of returning it to the polishing wheel, which will make it smaller, in order to increase its clarity or improve its color, making it more beautiful. Attempting to polish a diamond a second time is an enormous risk. However, extremely experienced diamontaires sometimes truly feel that the risk is justified. For example, the renowned Laurence Graff attempted this brave move a number of times and saw successful results. On the other hand, there have been countless attempts by many diamond cutters, which did not turn out as well!

Diamonds in the Rough: The Diamond Cutting and Polishing Process

A diamond is assessed based on the 4 Cs: color, clarity, carat, and cut. The first three elements are left to nature to decide, for the most part. The color and clarity can only be improved naturally by cutting the diamonds in a certain way, and it is almost always preferred to keep a stone as close to its rough size as possible. The cut of a diamond, however, is entirely man-made. That is a lot of pressure to handle, and it only grows with every unique stone that finds its way to the polishing wheel. When a rough diamond comes into the laboratory from the mines, it goes through an assessment process where the most suitable cut and shape is decided. Once this has been determined everything is left up to the computer and the machines.

The famous Laurence Graff of Graff Diamonds has attempted on a number of occasions to improve a diamond's characteristics by choosing to re-polish it. Luckily, some of these attempts proved to be successful! These include the prominent Wittelsbach diamond, which Graff purchased in 2008. Graff took a colossal risk by re-polishing the 35.52-carat Fancy Deep Grayish Blue stone, but to his delight, only 4.45 carats were lost while achieving a Fancy Deep Blue grade and improving the clarity from a VS2 grade to Internally Flawless. At 31 carats, the Wittelsbach-Graff diamond is still one of the most important and noteworthy diamonds on the planet. He did the same with the renowned Graff Pink, which began as a 24.78 Fancy Intense Pink, Potentially Flawless and became a 23.88 carat Fancy Vivid Pink, Internally Flawless – a huge jump in grading and value.

Though it can be said in retrospect that Graff’s decision to re-polish the already glorious diamond was genius, it obviously would not have been said had things taken a turn for the worst like it has so many times before. Leibish & Co. has much experience with polishing and cutting and has had many successes, resulting in spectacular diamonds. Having said that, it has also experienced some misfortunes, such as in the case of a 0.15-carat Fancy Pink princess cut diamond. While re-polishing a stone can result in improvements, it can also end in destruction. The process in this case caused the stone to explode from within, ultimately destroying the entire diamond. On the other hand, Leibish & Co. took Argyle Tender Diamond Lot No. 6, a 1.71 carat Fancy Intense Purplish Pink Radiant diamond and polished into the incredible 1.68 carat Prosperity Pink, a Fancy Vivid Purplish Pink. 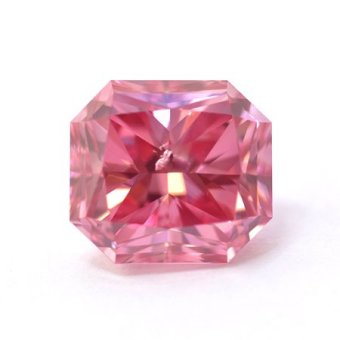 Though it would be terrific to say that polishing a diamond is always a plus, that would be far from the truth. Life is full of risks and the world of diamonds is no exception. Knowledge and expertise can go a long way, but it doesn’t always go long enough! It is the hope though, of all successful diamontaires, to provide the world with the most beautiful diamonds on Earth.