Auctions are always exciting events, especially if they are auctioning extremely rare diamonds. It wasn’t long ago that the largest rectangular-cut fancy vivid blue diamond and the largest pear-shaped fancy vivid pink diamond ever to be auctioned were set to be offered for sale at an upcoming Christie's Magnificent Jewels auction and a Sotheby's auction in Geneva. The stones have both since been sold and one actually set a new price record! The blue diamond sold for an astounding $51 million (without fees) while the pink diamond brought in an impressive $31.5 million.

A 14.62-carat rectangular-cut fancy vivid blue diamond, known as the "Oppenheimer Blue" and a 15.38-carat pear-shaped fancy vivid pink diamond, called the "Unique Pink," made headlines after selling for record prices. The Oppenheimer Blue, named for Sir Philip Oppenheimer who used to own the stone, was estimated between $38 million and $45 million but managed to fetch an extra $6 million. This sale officially made the Oppenheimer Blue the most expensive diamond ever sold at auction, a title that once belonged to the 12.03-carat Blue Moon, which sold for $48.5 million.

The Unique Pink is believed to be of unusual purity and quality, and though it sold for $31.5 million, it did not break the record of most expensive pink diamond or the top estimate of $38 million. Still, the $31.5 million that was paid isn’t too shabby!

For 25 very long minutes, bidders had the opportunity to own what is now being called the world’s most expensive diamond. Auctions are always exciting and nerve wracking events; that is their very nature. However, this specific auction not only broke records in terms of the sale of the Blue Oppenheimer but in terms of the exhilaration that was felt. Amidst plenty of laughter and lively bids, a winner was crowned with the slamming of the hammer, selling this unique 14.62-carat stone for a whopping $57.5 million (including fees.)

Regardless of the actual records, both of these stones were extremely monumental sales as diamonds of their stature rarely make it to auction. Unworldly sums of money were spent on nature’s most miraculous gifts leaving us to ponder the concept of how nature’s wonders account for some of the most valuable items on the planet.

Browse our full collection of natural fancy colored diamonds, and share the ones you like with your frineds!

The Aurora Green Diamond Sold for a Record Breaking $16.8 Million 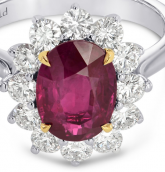