February 14 is fast approaching and with it the feeling of love in the air. Valentine’s Day, established in 496 AD by Pope Gelasius I and named after one or more Christian martyrs by the name of Saint Valentine, is a day for lovers to express their affection for each other.

Legend has it that Saint Valentine was interrogated, persecuted, and eventually executed by the Roman Emperor, Claudius II for being a Christian. Prior to his execution, it is claimed Valentine performed a miracle and healed the blind daughter of his jailer to who he had become enamoured. On the evening before his execution, he sent the jailer’s daughter a card that contained the immortal words, “From your Valentine.”

Another legend evolved that Valentine refused to accept a law of Claudius II that young men remain single so that they, in his opinion, would make better soldiers. Valentine would secretly perform marriage ceremonies though for the young men, hence another event connecting Valentine to the propagation of love.

As Valentine’s Day has evolved, so have the types of gifts given. From the giving of small gifts such as flowers, cards, and confectionary in the early days, the 1980s saw the increased popularity of giving jewelry on Valentine’s Day as an expression of love and devotion.

The romantic connotation of Valentine’s Day has seen it become a traditional day for engagement proposals. Documented as early as Roman times but not generally adopted in the Western world till' the 13th century, the first authoritatively documented use of a diamond engagement ring was in 1477 with the presenting of a diamond ring by Archduke Maximilian of Austria to Mary of Burgundy.

With almost 650 years of tradition, it has become accepted practice to present a diamond ring when asking for one’s hand in marriage; with a more recent evolution of this custom being the presentation of a fancy color diamond ring. And since Valentine’s Day celebrates romantic love, it is only natural that about 10% of all engagement proposals take place on February 14.

Early US forecasts for this coming Valentine’s Day by the National Retail Federation predict retail spending will increase by 13% this year. The average person is expected to spend $116.21 on traditional Valentine’s Day gifts, a 12.8% growth over 2011, while jewelry and clothing will enjoy the highest increase in expenditures.

Diamond jewelry is deemed a logical choice to express one’s love as both love and diamonds exhibit similar characteristics such as beauty, an eternal dimension, and rarity. 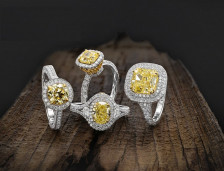