I was always an admirer of Warren Buffett, even though I don’t own a single piece of his Berkshire Hathaway stock. In my books, he is cool.

I am sure that it is great fun to have lunch with him, despite the stiff price tag in excess of USD2.5 million. It must be great to bask in the wisdom of a living legend.

Still I have some problems with that lunch. The food I eat must be kosher and gluten free; and I don’t like the cherry cola he drinks. However, if I could scrounge up the USD2.5 million, I would certainly ask him a few questions.

Berkshire Hathaway owns Borsheim Jewellers in Omaha and Buffett made a pledge to sell jewelry in the store. So, famed billionaire Warren Buffett fulfilled his pledge to sell jewelry for an hour at Borsheims and by all accounts, he was a big hit. In fact, according to the store’s President, Susan Jacques, the Omaha retailer—which is owned by Buffett’s holding company, Berkshire Hathaway had its best weekend ever.

Having a world famous salesperson has certain advantages, Jacques noted.
“[Buffett] did an amazing job,” Jacques said. “There was a huge line of people. He is such an iconic figure to the shareholders. Where else can they actually say: Warren Buffett sold this to me?”

Buffett, Chairman and CEO of Berkshire Hathaway, sat on a chair behind the counter while Mrs. Kovitz tried on the jewelry.
"I think it's absolutely beautiful," Buffett said. In an aside to her husband, he said, "She doesn't need much help." To Kovitz he added: "You're positively dangerous."

After Buffett closed the sale, [another customer] said, "… he told us whenever he buys jewelry for his family he has never regretted it. He thought it would be a good investment."

Who am I to disagree with Warren? After all, people pay over USD2.5 million just to have lunch with him. However, I managed to receive a piece of his wisdom for free - jewelry you buy for your family is a good investment.

When you consider that gold has risen from USD700 to USD1,800 a troy ounce in under three years and that a 5ct D IF retails for almost USD1.5 million, it is obvious to me that a 5ct fancy yellow as part of a handmade ring for USD80,000 is a bargain.
What makes a fancy color diamond ring a good investment? The best reason is that whatever stocks you buy - Coca Cola, Citi, or Berkshire, your wife will tell you, “Why did you buy this stupid stock? Don’t you see what is happening to the market? Who do you think you are, Warren Buffett?”
I promise you that if you buy her a 5ct Fancy Yellow Diamond Ring she will be happy and you won’t get bashed about the future value of the jewelry you just purchased. And you know what they say, “Happy wife, happy life.”

Let us now compare how stocks, fancy color diamonds, and gold have performed over the past decade.

So, when comparing a 5ct fancy yellow diamond to Buffett’s company, BRK-B, and another of Buffett’s favorite companies, Coca Cola; it easily outperformed them. Gold has embarked on its greatest bull run in history and although its price appreciation has been phenomenal, so have been some of the corrections along the way – something not encountered with fancy color diamonds. And history has shown that slow and steady wins the race, especially when you can easily insure your diamonds with QReport Insurance (providing you live in the US or Australia).

So if you want to know why Warren Buffett bought Borsheim and went to act as a salesman for a day, it is because he is convinced that jewelry is a good investment.

Utilize the LEIBISH Expert Investment Consultation Service and we will be pleased to assist you in making it a really good investment.

Keep in mind though, there is no such thing as a free lunch - especially with Warren Buffett.

For assistnace in assambling together a portfolio of Fancy Color Diamonds please contact us at: info@leibish.com or call: 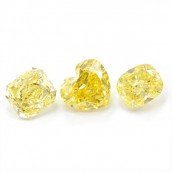 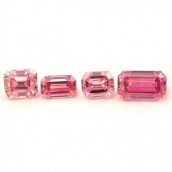