Heiress Nicky Hilton, sister of the infamous-turned-famous fashionista/designer/actress Paris Hilton, has tied the knot and is showing off quite the ring. It was only back in August when Nicky Hilton Says 'Yes'!, but now everyone managed to catch a glimpse of the diamond-studded wedding band as the newlywed headed back to her hotel after the couple’s glamorous wedding reception.

Having changed out of her stunning Valentino gown and all dolled up in a sparkling mini number, assumingly by Versace, Nicky waved her hand just so, giving the ambush of paparazzi a nice juicy snapshot of the newest jewelry addition to Nicky’s ensemble.

Pictures of the brand new Mrs. Rothschild reveal a glittering diamond ring upon her slender hand. It seems as though the band is a significantly sized ring adorned with mesmerizing white diamonds. It was paired with the celebrity’s engagement ring.

Though not as large as it could have been, considering the groom-to-be-of-the-time’s inheritance, Nicky’s engagement ring still sports a rather hefty-sized diamond. Weighing in somewhere between 6 and 8 carats, the square-shaped stone has been estimated to have cost between $500,000 and $800,000. Additionally, it is believed that the ring’s diamond has a D, E, or F color grade and a VVS clarity grade if not higher. However, impressive diamonds are not foreign to this family. When Paris Hilton was engaged to be wed, she was proposed to with a stunning five million dollar twenty-four carat canary yellow diamond ring from former fiancé billionaire Paris Latsis. It was such an impressive ring, that piece was written about in our most famous celebrity engagement rings.

Nicky and Jason began dating back in 2011 and decided to make it official about a year ago, during the summer of 2014. Jason Rothschild is a European banking heir who is based in England. Having gotten engaged while they were vacationing in Italy, the couple has been eagerly awaiting their nuptials, which took place just several weeks ago.

Nicky made a very impressive appearance as she arrived at her hotel after the duo’s wedding celebration. Not only was her sequined designer dress to-die-for, but she also wore a pair of silver heels that showed off her toned legs. Though this pair of shoes was not quite like her wedding shoes, which were embellished with the words Mrs. And Rothschild, one word per shoe, they were still gorgeous.

Although the big day may be behind us, we will surely hear from Mr. and Mrs. Rothschild in the near future, in connection with something luxury-related, that’s for certain. In the meantime, we wish the new couple much happiness as they begin their lives together as husband and wife. 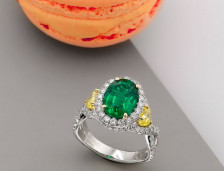