The heart-shaped 7.34 carat Fancy Vivid Purple I1 clarity Royal Purple Heart diamond is the largest Fancy Vivid Purple diamond known to exist. The stone emanates from Russia and was cut by the Julius Klein Diamond Corporation. The perfect heart-shaped cut of the diamond brings out the brilliance of the natural purple color of the stone.  It is considered heart shaped, even though it lacks the commonly known "cleavage" for which the heart shape is known.  Its current ownership, price, and other information are not known as present.

The diamond is named for two of its unique characteristics - its color and its shape, both of which are unique for this stone. Not all famous diamonds are named for the stone's characteristics, as they are sometimes named for their owner, for their origin, or for only their color. However, seeing as how the history of this diamond is largely unknown, it is appropriate that the diamond is thus named. British gemologist Michael Hing was able to examine the stone in person sometime around 2002. It is among a series of famous diamonds he has been fortunate to examine. "The stone has diagonal surface graining that is clearly visible to the naked eye on the table facet if you look at it under a glancing light," Mr. Hing writes, describing the stone. "It is not as blue as in your photo [shown above], it’s more purple than lilac. The girdle is very thick in parts, they were obviously trying to retain weight. It was mined in Russia."

A purple diamond is even rarer than a red diamond, although this fact is not officially accepted by all diamontaires. Officially speaking, red diamonds are the rarest color, followed by pink and blue. However, among most merchants you will find more red diamonds that purple available in their catalogs.

There aren’t many well-known purple diamonds. The most famous diamonds, of any color, are not only gorgeous, they are also almost always of a substantial size. This is another characteristic that sets purple diamonds apart from nearly all other diamonds; it is very rare to find big pure purple, gem-quality diamonds. Similarly, in the world of red diamonds, a red diamond of greater size than 5.11 carats has never been discovered. The largest known red diamond is the Moussaief Red, at 5.11 carats.

Purple is the color of royalty, of courage and honor. For years, it was considered the color of kings, as only royalty could afford the cost of purple dye for the cloth that was used to make their clothing. The Purple Heart is the medal that is given to soldiers that were killed or wounded in action, as a recognition of their bravery and sacrifice. With such powerful associations, it is no wonder that purple diamonds are considered among the most precious of all diamond colors. 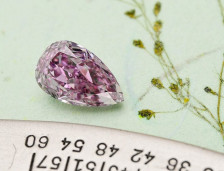