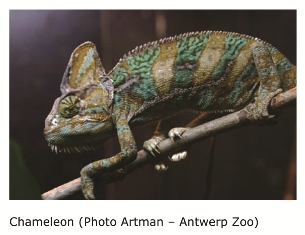 Chameleons are among the most remarkable animals known to man, with the ability to change their skin color spectacularly, and then to return to their original color. In the mineral kingdom as well, color-changing stones are encountered. Chameleon-type diamonds are well known, but extremely rare on the gem market. Evidently, they owe their name to the fact that they can change color, too. However, while the color change of the animal is limited to its skin, the chameleon-type diamond shows a change of its internal body color.

Most chameleon-type diamonds are relatively small. Recently, however, HRD Research had the opportunity to study an uncommonly large (4.89 carat) oval-shape diamond of this type. The stone was reported to originate from Mbuji Mayi in the Democratic Republic of Congo.

In its ‘normal’ state, this diamond has a greyish-green to greyish-olive appearance. But when the stone is kept in the dark for a long time, or when it is heated to moderate temperatures, for instance up to 300°C, its color changes to intense yellow. This is illustrated in the images in Figure 1.

Beyond simply admiring this remarkable change of color, the goal of scientists is to understand the mechanisms which produce it. Color in diamonds is caused by defects on the atomic scale in the crystal lattice. The most common way to study these defects is by spectroscopy: the analysis of the interaction of light (electromagnetic radiation) with the diamond. This light may be visible, or infrared (IR, with longer wavelengths), or ultraviolet (UV, with shorter wavelengths).

IR absorption spectroscopy is the basic measurement to study the defect content of a diamond. From the 400-1500 cm-1 infrared absorption structure, shown in Figure 2, it can be concluded that the present chameleon stone is type IaA. This means that it contains aggregated substitutional nitrogen impurities, mainly in the A form, that is, groups of two atoms. Moreover, some sharp absorption lines at 4496, 3107, 2786 and 1405 cm-1 can be seen, indicating the presence of hydrogen complexes in the stone. These types of defects have been mentioned for chameleon-type diamonds before, but they also occur in “normal” stones. 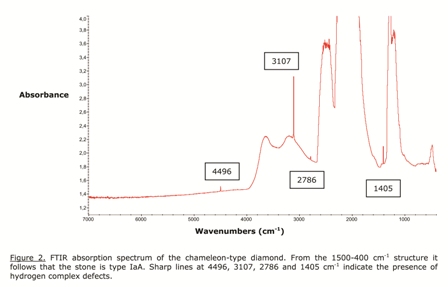 Another standard measurement is the room temperature UV-Visible transmission spectrum. This is shown for the present stone in Figure 3. Typical minima are seen at 415 and 426 nm, together with broad bands around 480 and 700 nm. 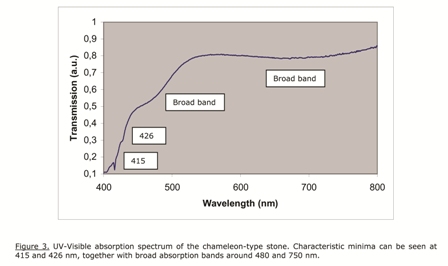 This type of spectrum has been observed for chameleon-type diamonds before, but it also occurs for so called “canary type” diamonds without the chameleon effect. These stones can be easily identified: they show yellow fluorescence under long wave UV illumination, approximately 365 nm, and red fluorescence under blue illumination, wavelength approximately 450 nm. This is shown in Figure 4 below. This property is typical for this type of chameleon diamonds, and can be used as a first test to select them.

From the images in Figure 1, it follows that the color distribution in the stone is very unequal. Indeed, apart from zones with greyish color (changing to yellow), more colorless zones can also be observed. This is confirmed by the DiamondViewTM image of the stone in Figure 5 below. 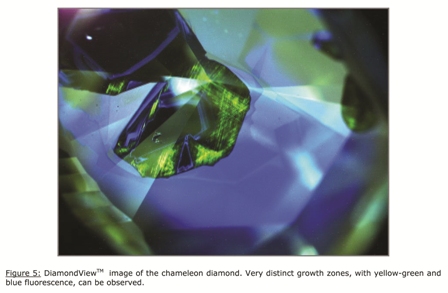 In order to study these different zones in more detail, the chameleon diamond has been examined with UV laser induced photoluminescence spectroscopy. It is seen that the green fluorescent areas are characterized by a broad emission band around 550 nm. This is related to nickel impurities in the stone: typical lines at e.g. 489, 496.6 and 523.1 nm can be observed. The blue fluorescent areas are characterized by additional, strong, N3 emission (aggregated nitrogen impurities, 415 nm line plus sideband).

It can be concluded that the present stone is an interesting, and very large, example of a chameleon-type diamond. The color change from greyish-green or greyish-olive to intense yellow is related to the presence of hydrogen and nickel impurities in the crystal lattice, but the physical mechanism behind this effect is not yet understood.

A first selection to find diamonds of this type can be made using fluorescence under long-wave UV and blue light. The lack of uniformity of the diamond is most remarkable, and it is interesting to see how the chameleon behaviour is strongly localized in the stone.

Thanks are due to Sana Diam NV (Antwerp) for making this stone available for examination.

Dr. Jef Van Royen has worked for HRD Antwerp (The Diamond High Council - Hoge Raad voor Diamant) since 1983, starting as Research Executive at the HRD Antwerp Certificates Department. In 2000, he joined the HRD Antwerp Research Department. His main interests in diamonds are the origin of color, and the identification of synthetic and treated diamonds. This article originally appeared in the magazine "Antwerp Facets." 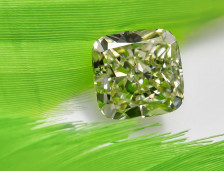 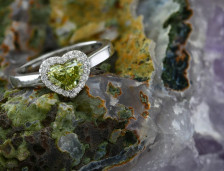 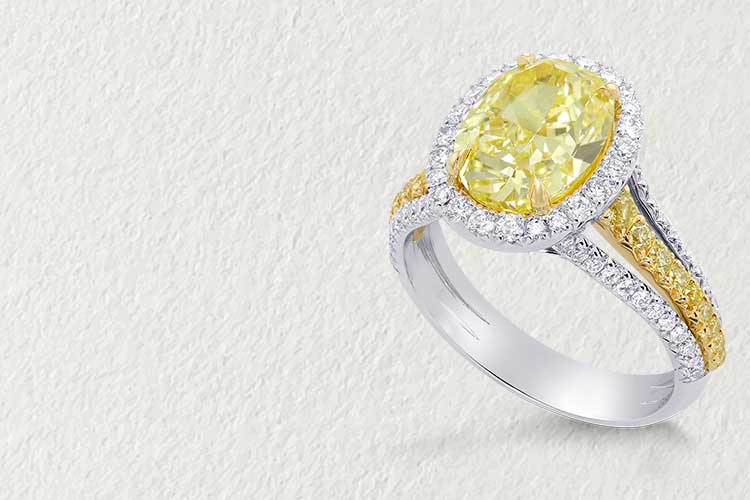