The Largest Blue Diamond In the World Hits the Auction House

The most well known public auction houses, both Christie's and Sotheby's, have consistently brought the most amazing diamonds and jewelry to the public eye. Always, finishing off the year with a bang, Sotheby's Geneva will be presenting a natural blue diamond that might just be the most expensive diamond ever sold at auction on Nov 11, 2015. 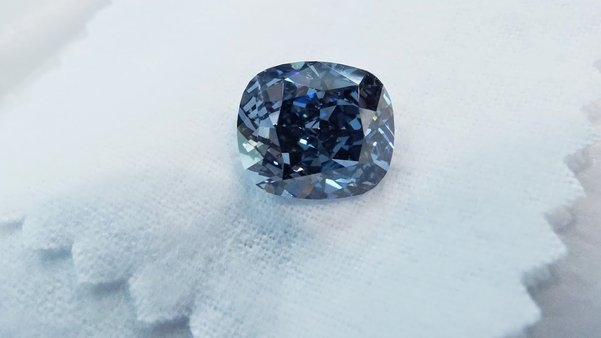 The Blue Moon diamond, a 12.03 carat, fancy vivid blue, with an IF clarity will be the highlight of the evening. Not only is this an absolute treasure, it is considered the largest cushion-shaped fancy vivid blue diamond to ever be offered at auction. The stone, which is estimated to sell at roughly $55 million, was classified by GIA as a ‘bright fantasy blue,’ which is the highest rating among blue diamonds.

Up until that point, the Wittelsbach Graff Diamond, held the record for the most expensive blue diamond sold at auction with a whopping $24.3 million. The stone was sold by Christie's back in December, 2008 to Laurence Graff, otherwise known as the 'king of bling.'

The diamond was originally sourced from the Cullinan mine in South Africa, and announced for the first time to the world last year as a 29.93 carat stone. There was a lot of excitement then, as the rough looked so promising. Only, no one would have imagined the outcome of an internally flawless vivid blue at such an impressive weight.