7 of the World’s Most Extravagant and Ostentatious Items

From 24K gold toilets to gold pills, the items on this list will utterly shock you with their lavishness and absurdity. Needless to say, most of us cannot fathom ever owning such items, but to each his own!

Harrods has recently launched a special edition of what is supposedly the most expensive perfume in the world, with a price tag of nearly $24,000. While it would be 100% believable that a perfume with such a prestigious name would be able to sell for such an extraordinary amount, as the standard bottle of this fragrance costs a whopping $231,000, the steep price is actually justified by the unique bottle that holds the perfume. The No. 1 Passant Guardant bottle is covered in 24K gold and is encrusted with 2,000 individually set diamonds. The diamonds are embedded within the crown-shaped cover as well as on the bottle itself along the lion design. Two yellow diamonds are used for the lion’s eyes while one pink diamond depicts its tongue.

For just $1,000, you can receive the most royal facial on the planet. This unusual facial consists of 24K gold, which is applied to one’s face. The facial lasts one hour and it is said to provide the skin with various benefits.

It’s one thing to spend a fortune on something you can use and enjoy, look at, or even see positive results from such as the gold facial. This one is consumed, a $35,000 pudding. This ridiculously expensive dessert, which looks more like a sundae, needs to be ordered two weeks in advance at a posh country house in the United Kingdom’s Lake District. The pudding is decorated with gold leaves, which is edible gold, caviar, and a 2-carat diamond.

As absurd as it might be there exists a $50,000 casket, which is essentially serving someone who is no longer with us and cannot appreciate it. Providing the deceased with a luxurious coffin is an admirable way to show one’s respect. One can be allowed one of the world’s finest and most beautiful luxuries in his or her final resting place. Golden Caskets has released a 24K gold handmade casket that has a ruby red velvet interior. It also comes with a gold picture frame and keepsake box.

If there is anything appropriate for big money, it is definitely a poker set. Every piece of this unique set is as magnificent as its $7.3 million price tag implies. The set includes 18K gold game gems and chips set with precious stones. In addition, the dealer’s button is made from 18K gold and is set with diamonds! To top it off, the set is stored in an alligator skin case lined with suede.

A gold toilet, not to mention gold toilet paper, sounds counter productive. Why shouldn’t be able to feel like a king or queen, even when using the restroom? Kim and Kanye’s gold-plated toilet worth $1 million is nothing compared to the $2.5 million solid gold toilet built in Hong Kong. The toilet comes complete with a roll of $1.3 million toiler paper. As can be expected, the pair of items have yet to be used.

The prize for the most flamboyant item goes to the $62 million Lamborghini. This car on its own is a prized gem. Add the gold factor and we are talking about something simply out of this world. The Lamborghini showroom in Dubai unveiled a gold, platinum, and diamond Lamborghini in 2012. The price for the much smaller car (just a prototype) was $7.8 million. The price for a real-sized vehicle, about twelve times the size, would be $62 million.

There are lists and list of the world’s most expensive diamonds, pieces of jewelry, and even specific items such as pens, watches, and iPhones. A list that is perhaps slightly less common is one that contains very unusual items that are nonetheless worth a fortune, and it is up to those who have the money for them to spring for them! 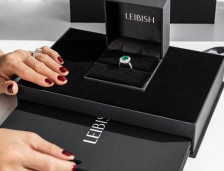