A devout fan of Agatha Christie purchased a trunk at the Agatha Christie house contents sale held at the Greenway Estate, Devon, for a mere 100 pounds in 2006. Four years, later, while the owner of the trunk was doing construction on her home, she took the opportunity to pry open a locked strongbox that was stored inside. She was shocked to discover a purse of gold coins and a collection of jewels worth 10,000 pounds, which had been put there by Christie’s mother. A three stone diamond engagement ring and a diamond buckle shaped brooch are among the pieces that are to be auctioned at Bonham’s on October 8.

Possibly even more fascinating than the pieces themselves is the story of how they were discovered Now, two of these jewels will be auctioned off at, Bomhams, one of the most prestigious auction houses in the world. The diamond brooch has a pre-sale estimate of between 6,000 and 8,000 pounds while the diamond engagement ring is being offered between 3,000 to 5,000 pounds. Interestingly enough, these very jewels were mentioned in Agatha Christie’s biography, where she discussed them as being reserved for her and her sister Madge to inherit from their mother’s collection. Christie talked about how her sister was meant to inherit a piece that is not for sale while she herself was in line for the diamond brooch. She also described how her mother meticulously chose items from her belongings and placed them in trunks.

In the Safe Hands of Bonhams

The lovely jewels, chock full of history, have been entrusted to the hands of Bonhams, one of the leading auction houses in the world after Christie’s and Sotheby’s. Originally established in 1793, Bonhams is one of the four surviving Georgian auction houses in London. In 2011, Bonhams was formed by merging Bonhams & Brooks and Philips Son & Neale, the second of the four original auction houses. The esteemed auction house operates two salesrooms in London; one on New Bond Street and one in Knightsbridge. The latter location will be auctioning the two Agatha Christie jewels.

Auction houses play an important role in the sales of antiques, jewels, and other important items as they carry a distinguished name. In this case, the diamond brooch and engagement ring will sell like hotcakes since they hold both the name of the legendary Agatha Christie and the well-respected Bonhams auction house. 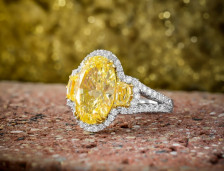