The late John F. Kennedy proposed to Jacqueline with a 2.84-carat emerald and 2.88-carat diamond engagement ring. The unusual crossover styled ring also featured baguette-cut diamonds to accent the other stones. Later on, the former First Lady had the baguettes switched with marquise and round diamonds. Only after the President’s death did she go back to the original setting in order to honor her deceased husband’s particular design.

Although Halle Berry had not planned on marrying again, she happily flaunted her stunning emerald engagement ring back in 2012. Fiancé Olivier Martinez presented her with this unique ring designed by Robert Mazio. The 4-carat emerald is paired with two colorless diamonds and set in yellow gold.

The Duchess of Windsor, who recently passed away, had a magnificent 19.77-carat Cartier emerald and platinum engagement ring. King Edward VIII gifted Wallis Simpson with the rectangular emerald ring. In honor of their 20th anniversary the Duchess had the emerald remounted onto a platinum and gold setting, but held onto the original setting with its inscription, her entire life.

Actress Grace Kelly joined the royal family after marrying Prince Rainier of Monaco. He proposed with a 12-carat emerald-cut diamond engagement ring. The large diamond was worn in her last film, High Society. The famously line that relates to the stone is, “some stone, did you mine it yourself?” Baguette diamonds were placed on either side of the diamond. The prince chose these diamonds himself and took inspiration from what Hollywood actresses were wearing at the time.

Angelina Jolie is one of the iconic emerald-wearing celebrities. She has been seen on numerous occasions dripping in emerald jewelry, including an emerald ring and emerald earrings. The contrast of the green stones against her all black or all white getups is simply mesmerizing.

Beyoncé has also been known to wear emeralds, as she did to President Obama’s 2013 inauguration. She wore emerald earrings and a matching ring against a black dress.

Emerald engagement rings are quite unique but many are catching on to the gemstone trend. The green stone provides a great deal of color and life to an engagement ring in contrast to the bland colorless diamond. We will surely see more of this fabulous stone on celebrities in the future. 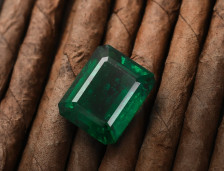