It's funny… the question of whether a diamond loses value or is considered 'used' when it is second hand has come up. Well, perhaps this upcoming auction will help answer that question! Spoiler alert, the answer is there is no such thing when it comes to diamonds!

Some of the most beautiful and valuable diamonds that exist in the world today were once in the possession of various members of royalty or celebrities of sorts. One example is the famous and beloved Elizabeth Taylor, who was extremely well known for her stunning jewels. Despite the many unique pieces of jewelry that the actress once owned, there are some outstanding gemstones that have not really been on the public's radar, until recently.

Shirley Temple, the little girl who stole the world's hearts and lifted America's spirits during the Great Depression, received a 9.54-carat blue diamond ring from her father for her 12th birthday and in honor of the premier of her film The Blue Bird, in the early 1940s. This quality stone is rare, unique, and holds important history. It is for these reasons that the piece is said to bring in exorbitant sums at the upcoming Sotheby's auction.

Mounted upon a platinum Art Deco setting, the large cushion-shaped fancy deep blue diamond ring is flanked by colorless diamonds. Though the stone has now been returned to its original setting, an additional setting exists. It is yellow gold and was created especially for Shirley Temple by Tiffany's in 1972. Both settings along with the rare stone will be auctioned at Sotheby's Magnificent Jewels Sale on April 19th. The ring is estimated at $25 million to $30 million. Shirley wore the ring on a regular basis and was seen with it publicly on many occasions, including when she was sworn in as an ambassador and when she presented at the Oscars.

Though the ring was bought in the 1940s for a mere $7,210, a large sum during that time no doubt, it was a far cry compared to equivalent prices in modern times. This is because back then the world did not understand or appreciate color diamonds the way they do today. Now that we are aware of the extreme rarity of these stones in addition to their sheer beauty, prices have soared accordingly.

Worn and adored for decades, the magnificent blue diamond ring will soon find a new home. The lucky winner of the upcoming auction will not only have a fine piece of jewelry in his or her possession but will also be able to claim to have a piece of the actress who was once considered the biggest movie star in the world. 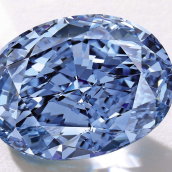 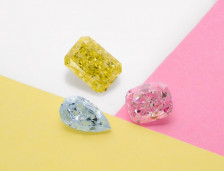