The only thing better than a huge stunning Pink Diamond of approximately 34.65-carats, is learning that it is up for auction at Christie’s this month! During a day-long auction with up to almost 300 jewels, on April 16th, 2013 the Princie Diamond may find a new home. This extremely unique fancy intense pink cushion-cut diamond with a VS2 clarity was originally found in the Golconda mine in South Central India.

The diamond has a rich history, as quoted from François Curiel, the Chairman of Christie’s Jewelry Department. “One of the largest and finest pink diamonds in the world, the Princie Diamond carries a fabulous provenance, which brings together the legendary names of Golconda, Nizam of Hyderabad, and the Maharani Sita Devi of Baroda.” He continued to say that “This rich history, combined with its rare pink hue, conveys a special charm, which will speak to all collectors in the world seeking the best of the best in gemstones.” It was up for auction previously in 1960 labeled as “Property of a Gentleman.” It was purchased by the London branch of Van Cleef & Arpels for £46,000 from the owner who was later exposed as the Nizam of Hyderabad himself. Shortly thereafter Van Cleef & Arpels held a party in Paris branch where the diamond was named the “Princie” in honor of the 14-year-old Prince of Baroda, who attended the party with his mother Maharani Sita Devi.

In addition to the diamond certificate issued from the Gemological Institute of America (GIA), report 5111433470 dated 25 November 2009, which reads it is a fancy intense pink, natural color, VS2 clarity stone, a supplemental letter from the GIA will be provided as well stating that it is a Type IIa diamond. For those unaware, Type IIa diamonds are known as the most chemically pure type of diamond and often have exceptional optical transparency. They are typically desired most by collectors as a result of their color which is considered the most significant characteristic of fancy colored diamonds.

Christie’s estimate for this diamond is not posted, although it seems it may fetch between $30 million and $40 million. The most expensive diamond ever sold at auction was the Graff Pink Diamond, which went for $46 million. However, this amazing 24.78-carat Fancy Intense Pink Type IIA diamond, which was then polished down by Mr. Graff to a 23.88-carat Fancy Vivid Pink diamond had an estimate for $38 million. It is therefore amazing to think what this 34.65-carat Type IIA diamond may actually accomplish. The Princie is considered extremely rare as a result of its many characteristics. To think that it was purchased for merely USD70,000 only 60 years ago it is very exciting to see what will be of the Christie’s auction in the coming weeks. 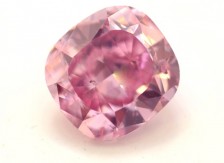