Hong Kong and the Rainbow Effect

We share a love affair with Hong Kong when it comes to Fancy Color Diamonds. We love em’ they love em’, we all love em’! Last night's auction proved once again that fancy color diamonds dominate in the auction house, bringing in the majority of the big sales and the highest prices per carat. It is safe to say that fancy color diamonds are proving again and again that they are the best investment possible in today's financial climate, due to their rarity, popularity, and desirability.

Hong Kong's Christie's auction last night had phenomenal sales, ending with a total of just over $91.95 Million. Vickie Sek, Deputy Chairman of Christie's Asia, Director of Jewellery and Jadeite Department, was very pleased with the results. We are also happy with the results! The auction house set a world record for an intense green diamond when a 6.13-carat, VS2, fancy intense green cushion-shaped diamond ring achieved $3.6 million or $594,510 per carat.

Overall Numbers at the Auction

Out of the 18 lots which comprise of colorless diamonds, jadeite, and other highly desired items by the world's affluent, the Fancy color diamonds amazingly accounted for over 22% of lots that garnered a sales price of over $1 million (2% of the overall 259 lots offered). By sales dollar figures, these 4 items accounted for a total of $14.4 million of sales, or 15.7% of the evening's grand total, which are quite impressive based on the rarity of fancy color diamonds and the laws of supply/demand. Fancy color diamonds are again showing their dominance in as desirable investment item, while still maintaining the romance of the love of beautiful jewelry.

The smallest star of the sale (but by no means least valuable or least beautiful!), was a 1.06 carat Fancy Vivid Green-Blue cushion shaped diamond ring that sold for $441k.

A 10.02 carat Fancy Vivid Yellow VS2 marquise shaped diamond ring estimated to sell between $800k and $1.2 million sold on the higher end at $1.1 million, or about $110k per carat. This was quite impressive, considering that a few weeks back in Geneva the Graff Yellow sold for a world record of $164k per carat, considering it was 10 times the size of this beautiful diamond.

A 12.93 carat Fancy Orangy Pink VS2 diamond ring by Harry Winston was estimated to sell between $1.6 million and $2.5 million. This ring ended up selling for $3.64 million, a 45.6% premium over its high estimates. This level attests to the rarity and desirability of pink diamonds! This one sold for about $281k per carat, quite notable although not record breaking.

A rare Fancy Intense Green was also sold last night. At 6.13 carats, cushion shaped, and VS2 clarity, the auction house estimated this stone to sell between $2.5 million and $3.8 million. The ring ended up selling for $3.64 million, or $594k per carat. Although it did not exceed its expectations, the numbers really gave value to the stone.

The last fancy color diamond lot auctioned in HK was Lot #2119, a very special pink stone. The 9.38 carat Fancy Intense Pink pear shaped diamond ring was estimated to sell at a price between $5.8 million and $8.3 million. It sold for $5.97 million, a true value for its worth, and with good predictable long term appreciation possibility at this price.

No fancy color diamond records were created or broken this time around. However, as a testament to our core beliefs about value and worth, this auction certainly proved value to investors new and established that are in this market.

We will definitely see more rises in the coming years as investors are getting more and more educated and receive a better understanding of the true value of investing in fancy color diamonds. It is a fact that people at times try to run after returns they believe that they missed in previous years, and thus are “willing” to take on extra risk to catch up. At the end of the day, this is not a successful investment strategy. You should and must rely on fundamentals. When buying fancy color diamonds with a long term approach, you will be able to reach the returns that you missed as rudimentary supply and demand rules kick in. 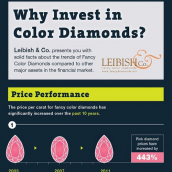