THE SECOND MOST EXPENSIVE DIAMOND SOLD FOR $39.3 Million

Going once, twice, three times, sold! The cheering and applause roared in Christie’s hall earlier this week when the Princie Diamond set a new price record. The 34.65-carat Fancy Intense Pink diamond was sold for a fantastic $39,323,750 ($1,135,000 per carat), which is the most expensive diamond ever sold at Christie’s auction house.

Results of Christie’s New York Spring Magnificent Jewels auction, although expected, still shocked the world. Regardless of estimates provided, which was towards the 30 million dollar mark, when a new world record is set it is exciting!

The pink diamond of Indian origin is now the most expensive diamond to be sold at Christie’s, the most expensive Golconda diamond ever sold, and the second-highest price ever paid for a jewel at auction. Following not too far behind the magnificent price that was paid by Laurence Graff for the Graff Pink (a 24.78-carat Fancy Intense Pink Diamond with a flawless clarity which was sold at a Sotheby’s auction in 2010 for $46.16 million), the Princie Diamond is just another example of the strength that natural fancy colored diamonds possess in today’s versatile market.

The Princie Diamond took over the world’s second place for most expensive jewel sold at auction, which previously belonged to the Wittelsbach-Graff Diamond, a 31.06-carat Fancy Deep-Blue diamond with an Internally Flawless clarity which was sold in 2008 for $24.3 million. In comparison to one another the Princie Diamond annihilated the Wittelsbach-Graff, which was Christie's previous record for most expensive diamond sold at Christie’s and the second most expensive diamond ever sold in the world.

The diamond was originally owned by the last Nizam of Hyderabad, Mir Osman Ali Khan, who was formerly the richest man in the world. He sold the stone at Sotheby’s auction to Van Cleef & Arpel for a mere 46,000 pounds ($70,000) in 1960. Fifty-three years later, it took only a few minutes for an anonymous telephone bidder to win the Princie Diamond.

"Aside from Christie's sale of the legendary Collection of Elizabeth Taylor, this was the most successful jewelry auction ever held in the United States and Christie's was proud to have orchestrated the sale of such an historic gemstone," Rahul Kadakia, Head of Jewelry, Christie's Americas and Switzerland, said. Christie's New York magnificent jewelry sale garnered a total of $81,358,700 on April 16. 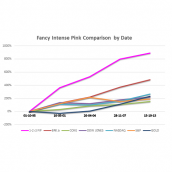