Leibish & Co. has had the pleasure of taking part in this event for several years. Each participant is allotted a specific time frame alone with an Argyle representative and the full tender collection. Without knowing any of the other bids, each participant provides a single offer of the highest price they are willing to pay for each stone. The highest bid wins.

Leibish & Co. was delighted to receive word that out of only 55 stones that were sold in the 2011 Argyle Pink Diamond Tender, they won six beautiful diamonds. This is consecutively after winning one stone in 2009 and another six stones in 2010.

The six winning bids of Leibish & Co. are shown below.

One of the highlights of the diamonds Leibish & Co. walked away with this year was lot #50, a remarkable 0.80 carat, Fancy RED, Oval-Shaped diamond. Shmulik Polnauer, GIA GG and Leibish & Co.’s Chief Buyer who participated in this year’s tender and won this stone, said “I have seen a number of beautiful red stones during my career. I found the color of this diamond incredibly rich and immediately saw the stone had a fantastic make. There were not many pure red stones like this sold at the Argyle tenders in the past and this was the only Red stone sold in the tender this year. To me, this stone reflected power and contained a dominating, alluring affect.”

Another one of the highlights Leibish & Co. walked away with was lot #6. This amazing 1.68-carat, Fancy Vivid Purplish Pink diamond was named the Leibish Prosperity Pink for its weight is considered extremely lucky by many of the Chinese persuasion.

Shmulik said "The exceptional size of the 1.68-carat stone with such pure vivid color saturation is in of and itself a rarity. We haven’t seen a vivid Argyle pink diamond over 1.5 carats for a long time in the market. The reddish color flashes and the exiting strawberry touch are unique markers of a real Australian Argyle Pink diamond. With its combined magic and lucky number 168, recognized by those of the Asian persuasion as a “Road to Prosperity,” we decided to call this amazing stone The Leibish Prosperity Pink Diamond."

The Argyle Diamond Mine in the East Kimberly region of Western Australia is known to produce some of rarest and most beautiful diamonds in the market today.  As one of the world’s largest diamond suppliers, they produce approximately 20 million carats each year.

Diamonds were first seen in the area in 1979, when a geologist happened upon a diamond embedded in an anthill. Rio Tinto Limited jumped on the opportunity of a lifetime and in 1982 started mining the area. They were already fully operational only one year later. The Argyle Diamond Mines Joint Venture (ADMJV) produces close to 600 million stones each year, of which just one tenth of one percent found is actually pink. 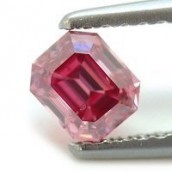