The pear-shaped, 10.83 carat, Internally Flawless Pink diamond was auctioned by Christie's Geneva in 1993 where it was purchased by Lawrence Graff of London for CHF6,163,500 and subsequently renamed the Graff Pink Supreme.

It is not known whether Graff still owns the stone today, or if it has since been bought by a private buyer.  Its color is a very saturated pink, probably with 'purplish' in its official color grade. Nothing is known pertaining to the unqie history of the stone other than that it is a relatively recent discovery.

Pink diamonds are one of the rarest diamond colors on earth, so it comes as no surprise that the diamond fetched such a high price at auction and was associated with so much fanfare and publicity when it was bought. Set as a ring, like the Graff Pink Supreme, pink diamonds make a beautiful addition to any personal collection. As is often found with pink diamonds at auction, pink diamonds of this size and even larger are often set as pink diamond rings so as to get the full effect of their beauty and presence.

Many fabulous pink diamonds have been sold at auction since the Graff Pink Supreme was sold in 1993. The most famous of these is the now infamous Pink Dream, which was originally introduced to the world as the Steinmetz Pink, and then became the Pink Star when it was sold at auction. Then, at the now renowned auction in 2013, it was bought for about $83 Million, although the buyer soon after defaulted on the purchase because of the lack of support from his consortium, and the auction house had to pay for the diamond in the end. This of course only adds to the infamy and glamour of the diamond, and when it next goes up for auction, it is sure to fetch an even more impressive price.

The cause of the pink color in pink diamonds is still unknown, although it is thought to be the extreme pressure that the diamond underwent during its formation millions of years ago that causes the color in pink and red diamonds. Although this remains a mystery to scientists and diamontaires alike, the beauty of these diamonds still remains and most certainly accounts for their significant prices at auction. 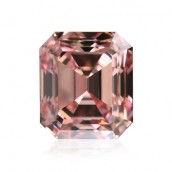