The Ashberg is a cushion – shaped, 102.48 carat diamond. The exact color and clarity grades of the diamond are not known. The stone is a variable amber color which could mean anything between yellow, orange, and brown. As amber is a vague term, it cannot be used to describe a diamond. The diamond seems to be of South African origin.

The Ashberg was named after Mr. Ashberg, a leading Stockholm banker, who acquired the diamond from a Russian trade delegation that visited Sweden in 1934. It was formerly a part of the Russian Crown Jewels. The stone was mounted as a pendant to a diamond necklace by the Stockholm firm of Bolin, former Crown Jewelers to the court of St. Petersburg. 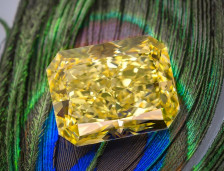