10 of the Most Expensive Diamond Engagement Rings

Some items in this world, such as houses, cars, and engagement rings, have hefty price tags to begin with. Then there are those who take it to a whole new level by buying incredibly luxurious and extravagant versions. From Kate Middleton to Angelina Jolie to Beyoncé; there are quite a few celebs and other big names whose engagement rings are worth small fortunes. Let us take a look at these magnificent pieces of jewelry and at their value.

She may no longer be with us, and her heyday might have been long ago, but her exquisite taste and passion for all things glitzy landed her what is still considered today one of the most expensive engagement rings of all times. Then fiancé, Richard Burton, presented young Elizabeth with a 33.19-carat diamond ring, which today would be worth $8.8 million! The Asscher-cut Krupp diamond displays a rather large culet facet and is a certified Type IIa diamond.

Kim’s current engagement ring from Kanye West may be smaller than her previous one but it is still quite enormous and cost a pretty penny! The 15-carat Lorraine Schwartz ring cost Kanye $8 million and can be seen a mile a way, just the way Kim likes it.

The former Destiny’s Child singer, Beyoncé, received a $5 million ring from fiancé Jay Z. The Lorraine Schwartz octagon-cut diamond is set on a platinum setting and weighs an extraordinary 18 carats. In addition to its unusual size and cut, the stone is flawless and displays a remarkable clarity, making it quite the premium diamond.

Another retro celeb to rock one of the world’s most expensive engagement rings is the lovely Grace Kelly. Her ring consisted of a 10.47-carat ring worth $4.06 million. Prince Rainier III of Monaco gifted the Hollywood star with this gem during an era that was not as flamboyant as things are today.

Though they are no longer together, Mariah Carey and Nick Cannon made quite the couple back in the day. Perhaps that is why Nick popped the question with a 10-carat diamond ring worth $2 million.

Anna Kournikova stole the hearts of millions, first with her world-class tennis skills, then with her beauty, and finally, with her sizzling romance with Latin singer Enrique Inglesias. Her relationship scored her a $2.5 million 11-carat pear-cut pink diamond flanked by two Trillion-cut stones. Hopefully she doesn’t wear that thing while playing tennis!

An antique 10-carat diamond engagement ring is what did it for Catherine Zetta Jones. The stunning yet rather simple ring is worth a staggering $2 million. The diamond is set horizontally and is surrounded by 28 smaller stones.

Though Katie Holmes and Tom Cruise’s relationship is long over, the 5-carat stunner of a ring still resonates through our memory. Estimated at $1.5 million, the ring was the talk of the town when Tomkat was the only news worth mentioning.

The beautiful “Friend” has been through a lot over the years, but it seems as though she is finally settled and happy. Having an 8-carat radiant-cut diamond ring worth between $500,000 and $1 million by her side doesn’t seem to hurt either.

George Clooney finally decided to settle down with Amal, and to show his dedication, spent $750,000 on a 7-carat emerald-cut diamond set upon a platinum band.

The one thing all of these fabulous rings have in common is that most of us will only get to dream of them. However, it is always possible to style your ring based on your favorite celebrity’s setting, so go ahead and check out some of our sensational engagement ring designs.

Whether you choose to go with a color diamond or a colorless one, decide on a platinum ring or a gold setting, and whether your ring will sport a solitaire stone or several diamonds, is all up to you. That is truly part of the fun that comes along with engagement ring shopping. 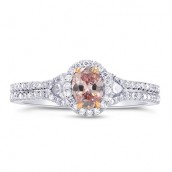 Get Inspired By Our Diamond Jewelry Recently Sales - August 2016 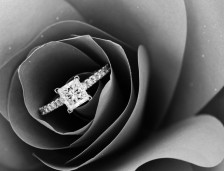 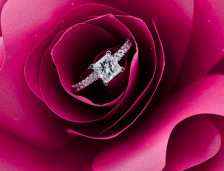