It is not very often that a diamond, especially one of significant value, finds its way anonymously to the hands of those in need. However, that is precisely what happened in Annadale, Virginia. The local Goodwill there was lucky enough to receive an anonymous donation of a 3 carat light brown diamond set in a yellow gold ring.

It was an otherwise ordinary day at the Goodwill of Annadale, Virginia, when the employees excitedly discovered a Ziploc bag containing jewelry among the day’s donations, including a rather large diamond ring. Sari Schray, the assistant retail manager at the Goodwill of Annadale who received the shocking donation, stated that she was “wowed” and surprised that something of this value had arrived at their location.

After the ring was discovered, it was put up for auction on the Goodwill site, ShopGoodwill.com. Though the starting price was $1,499, it quickly soared to $9,000 after a bidding war between 30 potential buyers.

A LEIBISH brown diamond halo ring, similar to the one brought to Goodwill

Set in a 14K gold setting with a 3.07 carat light brown diamond, the ring was immediately recognized as something special when discovered among the other jewelry pieces in the Ziploc bag. While the ring was appraised at approximately $1,500, the remaining pieces in the bag totaled $1,500 altogether. Either the person who donated the ring was not aware of the value of the ring versus the other pieces that they donated, or this donation came from the bottom of the heart of someone very generous and special!

The truth is that this is not the first time that this ever happened, as valuable items have been found at various charities before, sometimes unintentionally. One such instance is when an old desk was donated and contained $80,000 in bonds. The employees of the Annadale Goodwill branch are ecstatic about their diamond ring find and know that the money brought it from the ring’s sale will be able to help a lot of desperate people in need. 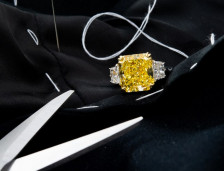 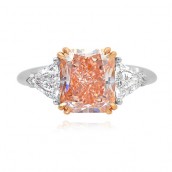