I have participated in some great auctions and know personally many of the important players who dominate these events.

A jeweler who buys an important diamond or piece of jewelry for $5 million, $10 million or even $35 million dollar is usually not acting out of excitement. Rather, he wants to take possession of something rare or wants to upgrade his existing inventory of similar stones. His consideration and motives are totally different from a private Asian buyer at auction bidding in Hong Kong on a pink diamond.

There are only a few prominent jewelers who command the bidding on big fancy color diamonds - they watch each other’s bids and try to take away the prey from their competitor. However, sometimes their real intention is not to buy a stone but rather to teach a lesson to a less sophisticated bidder.

It’s a bit like playing with the high rollers at the casino – if you want to play with the big boys, add money…and keep adding.  You want that blue diamond, bid a million above my bid. Everyone is watching, the adrenalin is high, and honor or “face” is at stake. The stone is sweet but nothing special but the bid is already USD7 million.

The London jeweler bids an additional 500 grand; the Grand Lady, his competitor, figures, “I have to top his bid,” and shows 8 million. Stunning silence in the room for a few seconds, then the Great Jeweler winks to the Grand Lady; good luck Madame and he raises his left hand to the auctioneer, acknowledging or feigning defeat.

The nature of today’s auctions in Hong Kong is not similar to those of Geneva 20 years ago.

The Hong Kong auctions of today are dominated by Asian privates. An auction is an evening out, where people want to see, be seen, and reckoned with as a serious player. It is a place to flaunt your money and chase an object of desire. It is a mix of opulence, decadence, and arrogance. It is more fun and entertainment than buying value.

Sometimes I am shocked by the price people pay at auction when compared with similar items we are selling online. No doubt there is less glamour associated with a private online purchase than an auction purchase; however there is also much better value to be had, more privacy and no time pressure. Plus, where is in auction the treatment you get is more similar to a product on a production line, we prefer the personal touch of on-going customer service.

The icing at auction is the commission of the auction house - usually 15% for both the buyer and seller. Naturally, the big players pay less. If you put up a 3 carat vivid blue IF, you pay no commission.

The problem of buying at auctions and tenders is that you can only win if you overpay. At the Argyle Tender, we bid on 25 stones but were only successful on six. At least at auction you see how much others are bidding; at tender, you bid blind – twenty five people bid and the highest bidder gets the diamond. You cannot buy cheap.

Following are some examples of jewelry recently sold at auction and similar pieces offered  by LEIBISH: 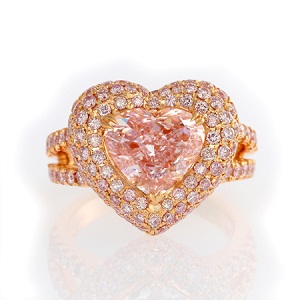 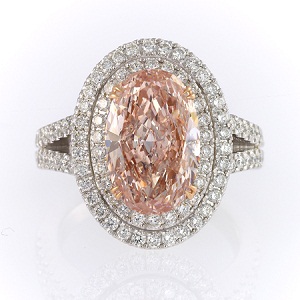