The world as we know it is evolving, and that includes the way in which we view engagements, proposals, and engagement rings. Once seen as solely belonging to women, engagements and everything related to them are seen being embraced by men more and more as time goes on. Men are opening themselves up to being on the other side of the engagement: being proposed to and being given engagement rings. Yes, diamond engagement rings, just like the womenfolk. Just recently, rapper Gucci Mane was seen proudly displaying his 4-carat diamond engagement ring complete with 1.5-carat side stones. Estimated at approximately $120,000, the ring is fit for any woman out there.

Fans of rapper Gucci Mane and model Keyshia Ka’oir will be pleased to hear of their engagement, though avid fans of the two may have already known this. Mane proposed to his sweetheart at an Atlanta Hawks basketball game where he presented her with a 25-carat diamond ring in front of a packed arena. However, just because the proposal went down the traditional way does not mean the couple continued to go down this road. The beautiful Keyshia gifted her fiancé with a mesmerizing triple diamond ring that would make any woman on this planet ecstatic. Mane was thrilled to receive the piece of jewelry as a representation of their love and commitment to one another and stated that he will never take it off. His Instagram post included a short video of the lovebirds holding hands and flaunting their glittering new jewels.

Men’s engagement rings are becoming more and more common along with the general shift among traditional roles. Women are embracing their changing role to a feminine figure that is also strong, and capable of showering gifts as much as she is able to receive them. We are also seeing the change in men who are opening themselves to more feminine-like products such as jewelry and other types of fashionable accessories. While this phenomenon is by no means as widespread as women’s engagement ring, it is most certainly something that has been gaining attention over the years. In fact, it was back in May, 2014 when Johnny Depp started sporting a women's diamond engagement ring.

As much as this story is heartwarming and beautiful to see, there are those who will feel that some traditions are worth maintaining. While this is sometimes true, the whole concept of engagements is something that was time based and is most certainly capable of evolving. Every person can decide for himself/herself what works best, but there are truly many options. Mane’s story is fairly ideal, as he was the one who proposed, but she had the opportunity to give him an engagement gift as well. Other options include two proposals and two rings, or even the complete opposite of a traditional engagement.

One of the greatest things about our times is that everything goes. Some women opt for a gemstone engagement ring, or don’t want one at all, while some men (some more vocally than others) want their own engagements rings to symbolize their engagement. There are wedding bands for men, after all, so why not engagement rings? That is most definitely some good food for thought.

Take a look at some of our amazing diamond and gemstone rings!

6 Myths About Engagement Rings That You Believed 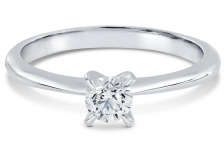