The Types Of Rubies

Rubies are what come to mind when you think of a red gemstone. However there are
many different types of rubies. Varying colors, shapes and quality. Read on! 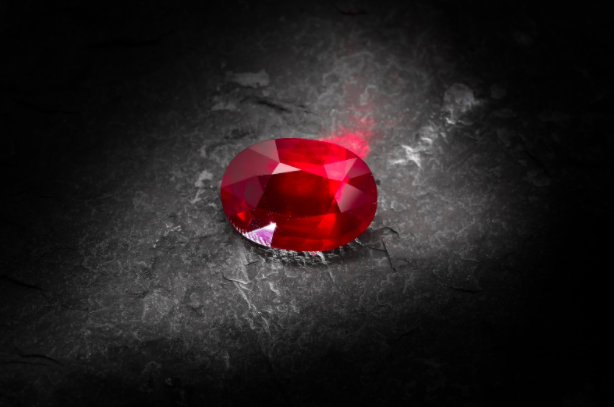 The different types of Rubies:

Although there are many gemstones with a rich red color , including garnets, spinel, opals, and
diamonds; rubies are often what come to mind when you think of a red gemstone. Both sapphires and
rubies are varieties of the mineral corundum. They rank 9 on the Mohs scale of mineral hardness right
after diamonds, which rank 10. In order to be considered a ruby and not a pink sapphire, a stone must
boast a certain level of redness. In addition to a ruby’s hue, saturation, and tone, rubies can be
categorized based on where they are from. Burmese, Thai, Tanzanian, Madagascar, and African rubies
can differ significantly from one another.

Rubies that originate from Africa, particularly Mozambique and Kenya, generally give off a purplish or dark red color. Although the stones range in quality and size, it is important to emphasize that the dark red African rubies are preferred. Burma is another noteworthy source for rubies. ‘Burmese rubies’ is a term often heard in the world of gemstones. Burma, now Myanmar, produces rubies that are known for their deep red color. Thai rubies are considered second to Burmese rubies. These gemstones have a darker hue due to the presence of iron and chromium. Rubies that hail from Tanzania are said to have a color similar to the red coloring of a hessonite stone. Madagascar is yet another, and rather recent, contender in the ruby market. Depending on the mining region, Madagascar rubies can have a red, or red-orange hue. Lastly, rubies have been mined in Afghanistan for centuries. These stones range from light to deep red, and can be like no others on the planet.

A gemstone receives its shape based on the formation of the stone, and not according to one’s taste alone. While the round shape is ideal for colorless diamonds, cushion and radiant shapes are preferable for most fancy color diamonds. Although rubies are color gemstones, their structure differs from that of a diamond. For instance, a ruby holds much of its color at the base of the stone. Rubies can be cut into all shapes including asscher, princess, emerald, cushion, and radiant although round rubies, oval rubies, pear rubies, and marquise rubies are the most prevalent.

Fine rubies can be purchased already set in jewelry pieces or as loose stones. If you are in the market for a loose stone you may come across rubies described as a ‘Pigeon Blood Madagascar Round Ruby.’ This term refers to the type of color the ruby displays, which is a very vivid shade of red, and very desirable. Madagascar marks the origin of the stone and ‘round’ of course describes its shape. Similarly, you may find a Thailand oval ruby, a Mozambique pear ruby, or a Burmese marquise ruby.

The most sought-after rubies of all predominantly come from Burma, now known as Myanmar, and best known as Burmese Rubies. The quality of these rubies is generally much higher than rubies from other locations, and usually display a richer more desirable red color. Pigeon Blood Rubies, the most looked-for color for rubies, are often Burmese Rubies. Click here for more information on Burmese rubies.

Being that the color is the most important of the 4 Cs (Color, Cut, Clarity, and Carat) when talking about rubies, it is logical that stones displaying a very vivid crimson color would be deemed the most desirable. The deepest and most preferred shade of red is called “Pigeon Blood. Pigeon Blood Rubies are rubies that display this highly coveted hue. Click here for more information on pigeon blood rubies.

Every so often, certain processes occur within nature that coincide with one another resulting in a coincidental and magnificent creation. All gemstones are the products of similar processes with additional conditions leading to very rare versions of the stones. The star ruby is a perfect example of this. A ruby is considered a Star Ruby when a three-point or six-point asterism (star shape) appears within the stone. This star is created when tiny fibers of rutile (also known as silk) have light reflected off of them in such a way that a star shape is formed. Click here for more information on star rubies.

Pink rubies are a term that can only be used in certain areas of the world, at least in this day and age. This is because in the United States, in order to be considered a ruby, red corundum must display a certain color intensity level. Stones with low levels of chromium, which is what gives the gemstone its red hue, are called pink sapphires and not rubies. This is something that was decided sometime in the 20th century and is not applicable worldwide. Sapphires account for the different colored stones of the corundum variety, besides red, which is called a ruby. Outside of the United States, any form of corundum that has a pink to red color is nothing other than a ruby, which would make it a pink ruby, and not a pink sapphire or a red ruby.

The introduction of what a pink ruby is and what it is not is enough to have one understand the importance the color has, not only in terms of determining what kind of stone it is, but in determining its value as well. Even pink rubies or pink sapphires have various intensity levels. Those that appear vivid pink will go for much higher prices. Larger stones will also demand higher sums, and good clarity grades can add to the price tag as well.

Once considered the main source for rubies, Myanmar (formerly Burma) is now one of several sources for both the pink and red ruby varieties. Pink rubies in particular are found in Sri Lanka more than any other country.

There are many famous and noteworthy red rubies, but there are far less famous pink rubies. A famous red ruby that originated from Sri Lanka, the source of many pink rubies, is the Rosser Reeves Ruby, which is also a star ruby. It weighs 138.7 carats and is well known for its color and size, despite the large scratch it had before it was re-polished.

Most people are aware of fancy yellow diamonds, however avid ruby fans are often shocked when they discover that yellow rubies exist.

Rubies are a variety of the mineral corundum, having said that, the chromium element, which is found in red rubies, is responsible for the red coloring and has other chemical implications as well. In order to be considered a ruby, the primary color is supposed to be red. The secondary colors however, can be orange, pink, purple, or violet.

Historically mined in Thailand, rubies are also found in deposits around the globe including India, Australia, Cambodia, Japan, Brazil, Scotland, as well as many other countries and regions.